Modern energy efficient lighting technology is rapidly evolving and is creating opportunities for U.S. businesses and consumers alike to save money and the environment.

Lighting represents about 20% of all electricity use in the United States with the cost to businesses and consumers topping $50 billion a year, according to the Department of Energy (DOE).

That’s the same dollar amount the federal agency estimates is being wasted annually by the owners of 2.8 million U.S. commercial, industrial and institutional buildings that rely on outdated lighting systems.

A company maintaining a standard 50,000-square-foot commercial building can spend up to $45,000 annually on energy for lighting alone, according to a report prepared for the National Electrical Manufacturers Association (NEMA), which represents 95 percent of the U.S. lighting manufacturing industry.

Over three quarters of the nation’s five million commercial, industrial, and institutional buildings were built prior to the debut of many cost-cutting, energy efficient lighting technologies on the market today, the DOE said.

Despite the initial higher cost of some modern lighting technologies, energy-efficient lighting last longer than traditional lighting, making them less expensive over their lifetime.

Returns on energy-efficient lighting technologies range from 30-50 percent, according to the NEMA report.

According to the DOE, a typical incandescent bulb, which wastes 90% of its energy as heat, lasts from 750-2,000 hours, while a comparable compact fluorescent lamp (CFL) lasts up to 10,000 hours. (source: http://www.energysavers.gov/your_home/lighting_daylighting/index.cfm?mytopic=12030#led) LEDs (light emitting diodes) can last from 35,000 to 50,000 hours or more, the agency said.

Lighting manufacturers have spent millions to comply with the new standards by transitioning to energy efficient lighting, now mandated by the Energy Independence and Security Act of 2007. 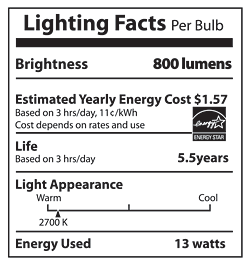 Packages of most light bulbs sold in stores in 2012 will carry a new Lighting Facts label – modeled after the “Nutrition Facts” labels on food packages –  to help consumers compare the brightness and estimated energy costs of various types of light bulbs.

The new label will give consumers information about brightness, known as lumens, energy cost, lifetime, light appearance (“warm” or “cool” light), wattage, and whether the bulb contains mercury.

However, Congress voted in December of 2011 to withhold funding for enforcement of the new regulations for nine months.

NEMA said the Congressional action “undermines those investments and creates regulatory uncertainty … and creates consumer confusion resulting from a patchwork of state enforcement.”

Nevertheless, upgrading to energy efficient lighting can help companies achieve the sustainability concept of the triple bottom line in the form of lower energy costs, reduced environmental impact, and improved employee well being and productivity.

Given some of the complexities buyers face in making lighting decisions, it’s important to have the basics of some of the most energy efficient lighting technologies explained.

Traditionally, when considering lighting purchases, consumers relied on the number of watts, a measure of how much electrical power the light source consumes. But with today’s modern energy efficient lighting technologies, consumers need to instead consider lumens – a measure of the amount of light produced.

Why the change? Using watts to describe the brightness of a lamp is akin to using gallons of gasoline to describe how fast a car can go, which wasn’t a problem when marketing incandescent bulbs that used only 10% of their energy to produce light, the rest wasted as heat.

With new energy efficient lighting products – using fewer watts to produce the same amount of brightness – entering the market, however, it makes sense for manufacturers to market these new products based on a value of brightness, or lumens.

A couple of key terms to keep in mind when considering aspects of lighting quality are color appearance and the Color Rendering Index (CRI). 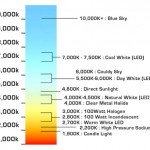 CRI is an internationally accepted measure of how well a light source renders colors, compared to incandescent and daylight sources. The CRI scale of 0 and 100, with 100 representing perfect color rendering based on illumination by a 100-watt incandescent light bulb.

Here are the top technologies in energy efficient lighting and how they compare to standard incandescent bulbs:

Fluorescent lamps use about 25% of the energy used by incandescent lampsto provide the same amount of illumination. CFLs are short, curly versions of long tube fluorescent lights

“Induction lighting is one of the best kept secrets in energy efficient lighting.”
~ Department of Energy