Are all Lumens Equal? Consider how the human eye perceives light

The science of measuring light, in terms of how the human eye perceives its brightness, is called photometry.

The eye has two primary light-sensing cells in the retina, known as photoreceptors, called rods and cones, referring to their geometric shapes.

… lamps with high S/P ratios provide sharper vision both outdoors and indoors. So, a 200-watt magnetic induction lamp would appear just as bright or brighter than a sodium vapor or metal halide of twice the wattage.

The ratio of scotopic luminance (or lumens) versus photopic luminance in a lamp is called the S/P ratio, which is a multiplier that determines the apparent visual brightness of a light source as well as how much light a lamp emits that is useful to the human eye, referred to as visually effective lumens (VELs). 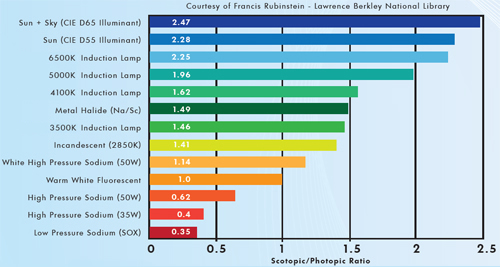 Generally, lamps with high S/P ratios provide sharper vision both outdoors and indoors. So, a 200-watt magnetic induction lamp would appear just as bright or brighter than a sodium vapor or metal halide of twice the wattage.

Now, as we mentioned in a previous article, the seven color bands produced when sunlight is refracted through a prism – red, orange, yellow, green, blue, indigo and violet – are part of the electromagnetic spectrum that’s visible to the human eye and all have different wavelengths.

To describe how the eye responds to those wavelengths, the lighting industry uses the term luminosity function, also called luminous efficiency function. 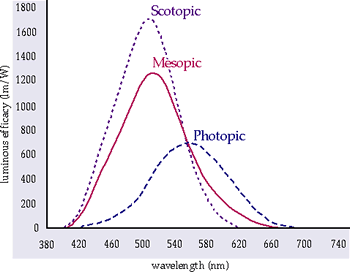 Commercial photometry is important for lighting installers and their clients in choosing the best locations to install fixtures as well as ensuring maximum efficiency of lighting systems.

Problem is, commercial photometry only considers the photopic luminosity function, which was established in 1924 by the International Commission on Illumination (CIE), and has almost always been recognized as underestimating how the blue and violet end of the spectrum – where the eye shifts in scotopic conditions – contribute to perceived luminance.

In the past, lighting manufacturers used light meters to determine lumen output, or luminous efficacy, of a fixture in order to gain maximum energy efficiency. But these devices relied only on photopic conditions, in keeping with the decades-old assumption that light sensitive rods only kicked in at low-light, or nighttime, conditions.

For lighting installers and their clients, that meant the effectiveness of certain lighting products used in nighttime applications, such as street lighting, in terms of energy efficiency and visual safety, was being underestimated.

In addition, relying only on photopic luminous function to measure nighttime illuminations requires some light sources to use excessive energy to generate the necessary light level.

Realizing the potential cost-savings that an alternative measure of lighting scenarios could produce coupled with the fact that photopic and scotopic were not mutually exclusive and that rods were active, not only in low-light but also during interior light levels, researchers set out to develop a new measurement.

Bridging the gap between scotopic and photopic

Researchers at the Rensselaer Polytechnic Institute’s Lighting Research Center (LRC) developed a “Unified System of Photometry,” which integrates both the scotopic and photopic luminous efficiency functions into a measurement system that can be used for any light level, including mesopic, perceptible to the eyes.

LRC researchers estimated that about half of U.S. streetlights could cut energy consumption by about 50 percent – annually saving one billion kilowatt hours – using a Unified System of Photometry to design more energy efficient lamps, including LEDs, without sacrificing perceptions of visibility and safety.

Field demonstration results in rural and suburban areas of Connecticut, Massachusetts, and Texas verified that by implementing the Unified System of Photometry the street lighting system consumed 30 to 50 percent less electric power and the residents believed they could see better and said they felt safer, when compared to lighting systems designed using the traditional system of photometry.

“By replacing traditional, yellowish high-pressure sodium (HPS) lights with ‘cool’ white light sources, such as induction, fluorescent, ceramic metal halide, or LEDs, we can actually reduce the amount of electric power used for lighting while maintaining or even improving visibility in nighttime conditions,” Morante said.

Sources for this article and further reading: