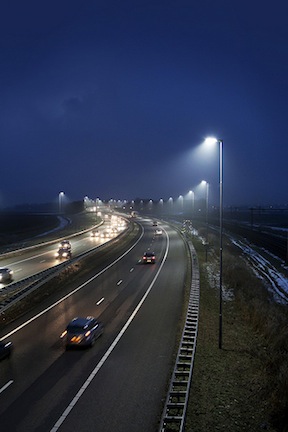 When the city of Chicago was looking in 2010 for a new energy-efficient standard for street and alley lights, it chose ceramic metal halide (CMH) lamps, becoming the first large U.S. city to use the new lighting technology.

This relatively new light source, touted for being compact, efficient, and powerful, is part of the high-intensity discharge (HID) lighting category, which offers the highest efficacy and longest life of any lighting type, and saves up to 90% of lighting energy when they replace incandescent lamps.

Chicago finished installing 11,000 CMH lights in 300 miles of alleys and 5,300 streetlamps on famous Lake Shore Drive and Western Avenue in August 2011. The city estimates to save nearly $750,000 in annual energy costs and reduce carbon dioxide emissions by more than 6,600 metric tons every year.

Metal halide lamps, both the traditional quartz and more recent ceramic types, have superior color rendition (80-96 CRI) among HID lighting types, and are increasingly in demand for large, high-bay indoor areas, such as big-box retail stores, gymnasiums and sports arenas, as well as indoor retail track and display lighting and even headlights in luxury cars. More outdoor areas, such as streets, security lights and car lots, are also being lit with HID lighting. 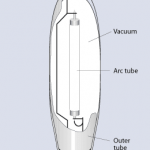 As the arc heats up it vaporizes the metal salts to form a plasma, which intensifies the light produced by the arc and cuts down the power consumption. HID lamps are non-directional and, similar to fluorescent lamps, require a ballast to start and maintain their arcs.

Compared with incandescent and fluorescent lighting, HID lamps have a higher luminous efficacy (how well a light source produces visible light) since a bigger proportion of their radiation is in visible light, not heat.

There are three common types of HID lamps:

MH lamps have a more full light spectrum than HPS or MV lamps, the latter considered to be older and less efficient technology. And, although MH lamps use fewer watts, they are brighter than the yellowish light produced by HPS lamps.

The history of CMH lamps can be traced back to a 1962 General Electric patent for an arc lamp called a Multi Vapor Metal Halide. A British firm, Thorn Lighting Group, exhibited the world’s first CMH lamp at the Hannover World Light Fair in 1981. Despite the good color properties, marketing the lamp was not possible because it required a unique ballast that was not available on the market.

CMH lamps were not introduced commercially until 1994 when engineers at lighting manufacturer Philips overcame the problems heat was creating for the tube’s seals.

MH arc tubes are made of either quartz or ceramic. Traditional quartz metal halide (QMH) arc tubes are similar in construction and appearance to MV lamps but by adding metal halide gases to mercury gas inside QMH lamps, the result is higher light output, more lumens (a measure of the total amount of visible light emitted by a source) per watt and better color rendition.

Lumens per watt (lpW) is a ratio expressing the luminous efficacy of a light source. Check out the differences below of typical lamp efficacies:

(The values above for discharge lamps do not include the effect of the ballasts, which must be used with those lamps. Taking ballast losses into account reduces “system” or lamp-ballast efficacies typically by 10-20% depending upon the type of ballast used.Source: GE Lighting)

CMH lamps have a CRI of 80-96. Light sources with a CRI of 80 and higher are considered to have excellent color rendering. Exact CRI depends on the mixture of metal halide salts in the arc tube.

Some low-wattage CMH lamps may also be used where incandescent lamps may have been preferred for their small dimensions and color rendering qualities, according to the DOE.

Other key characteristics of CMH lamps:

CMH lamps do have limitations, however. Throughout their lifetime, all metal halide lamps experience reduced light output and some increase in power consumption.

They, and their standard counterpart, can also take up to 10 minutes to start, not making them suitable for use with motion detectors. Because of the delay in strike time, manufacturers advise not completely shutting off them except for extended periods of non-occupancy.

Competing in the market

CMH lamps are quickly grabbing market share from their HID-cousin, HPS lamps, in the marketplace for outdoor applications such as street lights. A main reason for this is the growing demand for the whiter light of MH lamps over the less-desired, yellowish color of sodium lamps, which also u.

That certainly appears to be the case for the city of Chicago. Each CMH fixture it purchased was estimated to cut electricity use between $40 and $70 annually, with a lifespan of two to three years longer than the typical high-pressure sodium street lighting, which lasts about 5 years, according to a release from the city’s transportation department.

The agency said the CMH lamps cut down on “sky glow” (light traveling up, instead of down) by between 50 to 100 percent, depending on the type of fixture. They also reduce “light trespass,” or light shining into unwanted areas, like nearby buildings or homes.

Reporting on the installment of CMH lamps in the city, the Chicago Tribune cited another reason city officials wanted to replace the street lights.

“Since the large-scale adoption of sodium vapor lights in the United States and elsewhere, studies have been done showing that they can hamper police identification of suspects because they decrease people’s ability to tell one color from another, because they make everything look orange at night,” the newspaper reported.

The future looks bright for CMH lighting in a growing number of applications as manufacturers ramp up innovation in the category.

For instance, General Electric’s ChromaFit are metal halide lamps, sold in both traditional quartz and CMH versions, that operate on high-pressure sodium ballasts, giving users the option of switching from the yellowish glow of HPS to the white color of MH lighting.